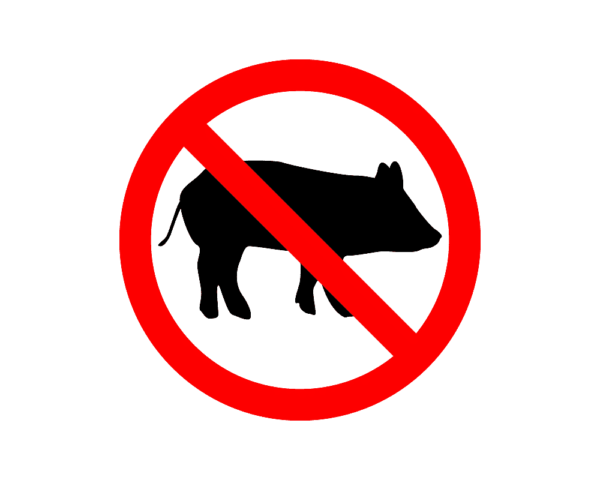 Why don’t Muslims eat pork? Here is What you Need to Know

With the inception of Islam, Allah Almighty and Holy Prophet introduced the concept of Halal and Haram in society. Muslims abstain from eating and drinking those commodities prohibited by Allah and the Holy Prophet. Two sources give the complete code of Islamic law. The first one is the Glorious Qur’an, and the other one is Hadith (the sayings and actions of the Holy Prophet).

Now there are a lot of questions regarding the prohibition of food in Islam, and the most persistent question is why don’t Muslims eat pork? The answer is present in Islamic law with logic and authority. Qur’an and Hadith both explained the reason for the prohibition of pork in Islam.

Prohibition of Pork in Islam

The prohibition of pork in Islam is derived from the following verse of the Qur’an:

“Forbidden to you (for food) are dead meat, blood, the flesh of swine, and that on which hath been invoked the name of other than Allah.” [Al-Qur’an 5:3]

The main reason pork is Haram for Muslims is because it says in the Holy Qur’an that some food is allowed to eat, but some are forbidden. The eating of pork is strongly condemned in Islamic law. There are many health reasons why it is not allowed to eat in Islam.

Now examine the various key points of this prohibition:

Why Muslims don’t eat pork According to Qur’an

As we mentioned before that Muslims are prohibited by Allah in the Holy Qur’an not to eat pork. Here is some evidence from the Qur’an with Arabic verses about the abolition of pork from food.

“He has only forbidden you to eat carrion, blood, swine, and what is slaughtered in the name of any other than Allah. But if the necessity compels someone- neither driven by desire nor exceeding immediate need- they will not be sinful. Surely Allah is all-forgiving and the most merciful”.

And in one more verse Allah says

“Say O Prophet. “I do not find in what has been revealed to me anything forbidden to eat except carrion, running blood, swine which is impure or a sinful offering in the name of any other than Allah. But if someone is compelled by necessity neither driven by desire nor exceeding immediate need- then surely your lord is All-forgiving and the most merciful”.

These are the Quranic verses that prove the prohibition of pork for Muslims.

Why Muslims don’t eat pork according to Hadith

With the advent of Islam, the Holy Prophet started to spread the message of Allah Almighty. He gave Muslims the sense of Halal and Haram according to Islam. The Hadith about the prohibition of pork are following:

Abu Tha’labah reported: I said, “O Messenger of Allah, we live in a land of the people of the Book. Can we eat from their utensils?” The Prophet, peace, and blessings are upon him, said, “Do not eat from them unless you cannot find anything else, then wash them and eat from them.” [Ṣaḥīḥ al-Bukhārī 5161, Ṣaḥīḥ Muslim 1930].

In another Hadith, the Holy Prophet says

These saying of the Holy Prophet abstain Muslims from eating pork and differentiate between halal and haram.

Prohibition in the Bible:

Eating pork has also abstained in the past. The Bible confirms the evidence of prohibition in three different places. One of the verses in which God forbids Moses and his followers to eat swine “because it parts the hoof but does not chew the cud.”

And there is another saying of God in the Bible (Isaiah) in which prohibition of pork is confirmed.

The nature of pork

The pig is considered a filthy beast animal of the ecosystem. It is unfit to eat for humans because of its unusual nature and dirty behavior. Because of the infectious nature of meat, it is a harmful food for human beings. Some studies show that the use of pork may cause memory loss.

Following are the key points of the prohibition of eating pork:

1. The order of Allah to Muslims that not to Eat the pork

Allah (SWT) orders in the Holy Qur’an the Muslims to earing pork, and for this reason, Muslims do not eat it. There are four different places in the Qur’an where Allah (SWT) mentions the prohibition of eating pigs.

You can read those verses to confirm why don’t Muslims eat pork.

The pig is a filthy beast because of its dirty nature, especially food. Pigs eat everything, including fecal matter. They live on mud and dirt, and even in a clean environment, they consume filth and create a sense of suffocation. Pigs also eat human corps and even their feces.

3. Pork is full of diseases

Even with a clean environment and proper cooking methods, the chances of being sick or infected with pork are very much high. It is one of the reasons that Muslims don’t eat pork.

3. The Indigestive Nature of Pork

As we know, the pig is a filthy animal, and it has filthy meat also. Pork is very high in fat, so human bodies may not digest it properly. The study proved that pork might stay in your body for more than two months and ultimately creates unwanted fat in the human body. These fats then caused various infections, which we mentioned earlier in this article.

A scientific study shows that people who eat pork can take on both appearances and characteristics of the pig. They behave indecently and have no honor for anyone. This is one more reason for Muslims to avoid eating pork.

4. A useless animal for humans

People generally like to carry those helpful animals in their domestic work, such as goats, sheep, cows, etc. These animals help humans in different ways and can live with humans without causing any harm to them. But the scenario for pigs is different because they do not live as pets or social animals. They harm the men physically and have nothing to do but create a fuss. These are the reasons for considering pigs as useless animals for humans on the earth.

Pork is Unhealthy According to Science

Many studies have been conducted on the topic because eating pork is unhealthy. Many scientists worked on this theory and claimed that pork is unhealthy, and the western population who eat pork carries more diseases than other populations who don’t.

How to Stay Avoid Eating Pork While living Abroad

Getting Halal food while living abroad is one of the most common problems Muslims faces. There is pork in every food of the non-Muslims, especially in European countries. Processed pork can be found in many other foods in the form of gelatin.

There are many treatments, such as used to kill bacteria, mostly used pork cleaners. So, you have to avoid pork while living there. Always find a halal restaurant and buy food from them. Before buying any product with packaging, read all the ingredients to avoid eating pork by mistake.

Why don’t Muslims eat pork? This is the most common question every person asks if you are visiting abroad. In the Quran, Allah has mentioned some rules that we Muslims have to follow and pork is among those things that are strictly prohibited in Islam. Eating pork is considered haram, so try not to eat pork at any cost. If we look into Hadith, we can also find some saying of the Holy Prophet (P.B.U.H) advising Muslims not to eat pork.

Pork is a filthy animal that feeds on its feces and lives in the mud. He feeds on impure food and grows in an unhealthy environment. Many types of research have shown that eating pork is not good for your health, so being a Muslim, it is our duty to stay away from pork.