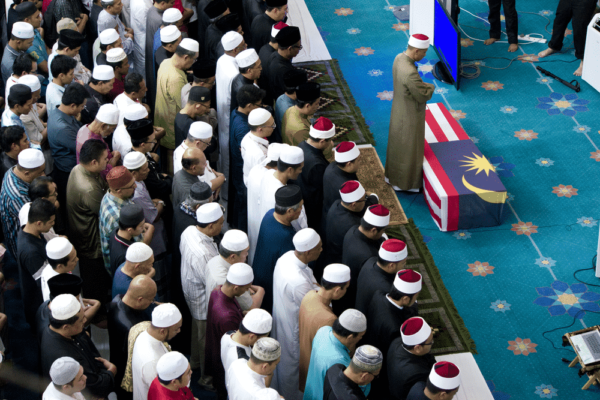 How to Pray the Janazah Prayer?

Most of the time, people did not know how to pray the Janazah (funeral) prayer? This article will give you the right way of praying funeral.

Death is the ultimate truth of this world. Whoever is born will have to die one day. Being a Muslim, it is a firm belief that man is mortal, and one day he will have to return to the place from where he belongs. So, it is suitable for all of us to understand the reality of this world as soon as possible and prepare ourselves for the next life, which is immortal.

What to say when someone dies in Islam?

When someone who is Muslim passes away, there is a tradition of mourning for at least three days. During this period, people gathered made dua for the dead person and wished his soul in good shape in heaven. Praying is an all-important responsibility of a Muslim. But Janazah prayer is not a Farz namaz, it is actually a Farz kiffayah.

Where do these words come from?

These words are coming directly from Qur’an. The verse in the second Surah Al-Baqarah of Qur’an.

“When disaster strikes them, who say, “Indeed we belong to Allah, and indeed to Him we will return.”

This verse explains that these words are used during distress or disaster. The verse implies that you can use it other than the scenario of death.

These are the common words people say in Islam when someone dies. These are the words of the Qur’an and part of a verse in the Holy book. There are precise meanings of these words that we are all created by Almighty, and we will return to the place where we belong to.

The hidden meaning behind these words is that death is inevitable, and we will die at the end no matter how strong we are. These words are part of a verse from surah Al-Baqarah in the Qur’an. It can also be used whenever something terrible happens.

How to pray the Janazah(funeral) prayer?

1. The first step is Wudu

2. Jammat is not necessary for Janazah prayer. A single person can perform it.

3. Now keep your face towards Kaaba and say the first Takbeer (Allahu Akbar).

“ I seek refuge with Allah from Shaitan – the accursed one.”

“ In the name of Allah, The Most Gracious, The Most Merciful.”

5. Say second Takbeer. It is your choice to raise your hand or not. Both are acceptable.

7. Say third Takbeer. You can either raise your hand or not. It’s up to you.

8. Now dua for the person who died. The dua is for mature dead person:

9. Say fourth Takbeer and pause for a moment. It is up to you to raise your hand or not.

11. Doing the salaam on both sides and completing the prayers.

12. After the Janazah prayer, make dua for the dead person’s magfirat.

The purpose of the Janazah prayer:

The primary purpose of the Janazah prayer is to remind the people about the reality of life. It is actually an alarm that gives a sense of reminder about death. Attending the funeral is to seek forgiveness for the dead person. It is also the firm duty of Muslims to attend the Janazah prayer of other Muslim fellows.

The Holy Prophet also encourages to follow the funeral procession of other Muslim fellows. After attending the Janazah prayer, a person feels more conscious and curious about his life and actions.

It gives you a self-reflection of your personality. These virtues tell us that attending the Janazah prayer is beneficial for your reckoning. It is an indication for you that one day you will die and stand in front of Almighty.

So, make sure your deeds are good enough to protect you in the grave from punishment. Let us correct our objectives and deeds to attend the Janazah prayer and learn the right way to offer it.

When we attend the Janazah prayer, we can benefit the three parties;

Although it is a fact that attending the funeral benefits others yet, at the end, when you die, you are responsible for your actions. So, earn for yourself as much as possible because, in the end, we cannot rely on others to pray for ourselves and send rewards.

Being part of the Janazah prayer is what the Holy Prophet does in his life. So, it is a Sunnah for the Muslims, and it has a huge reward when you follow the Sunnah.

2. It is the right of the dead person:

Every Muslim has some rights over other Muslim fellows and to accompany the funeral procession of other Muslims is one of them.

3. A huge reward of attending the funeral:

A person attending the Janazah prayer will get the reward equivalent to Mount Uhad.

4. Solidarity with the family of the deceased:

Attending the funeral of a Muslim is a gesture of solidarity and is a sense of comfort for the family of the deceased.

5. It causes us to remember the time of our death.

These benefits are enough to understand the importance of the Janazah prayer.

The reward of attending Janazah Prayer:

Attending the Janazah prayer gives you a huge reward. in a Hadith, the Holy Prophet (SAW) says that the bonus of attending the funeral is equal to the two huge mountains.

Here each Qirat is equivalent to Mount Uhad according to the Holy Prophet (SAW). This Hadith explains and glorifies the reward of attending the Janazah prayer.

Death is an inevitable reality of the world, and every soul has to taste it at the end. One day we all will leave the world and reach the destination from where we belonged. So, when someone dies, we have to attend his Janazah prayer to remind us of the time of death. For this purpose, every Muslim should know about the Janazah prayer and the method or way to offer the Janazah prayer according to Sunnah.